During the reign of the Sui Dynasty from 581 to 618, the major waterways of the Grand Canal were constructed between the Yellow River in the northern capital region and the Yangtze River in the southern rural region. The Grand Canal was the main transportation system that supported the proliferation of rice farming because it enabled crops grown in the south to be efficiently shipped to distant end markets in the north. 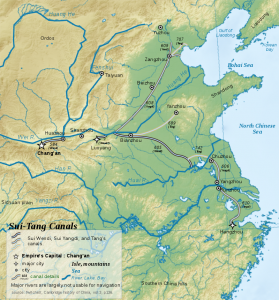 During the Tang Dynasty from 618 to 907, China initially flourished in the early Tang period with peace and stability until the outbreak of the An Lushan Rebellion in 755 began a long era of  regional instability throughout northern China. Although the Tang Dynasty were ultimately able to quell the An Lushan Rebellion after nearly 14 years of gruesome warfare, Imperial China had sustained such devastating losses that the strength of the central authority in the north became dwarfed by the power of regional military governors. Until the Song unification in 960, Northern China would continue to face many periods of rebellion and warfare that caused a significant southward population shift.

During the Northern Song Dynasty from 960 to 1127, the reestablishment of strong centralized imperial rule in China created a historic era of economic expansion and technological advancement that greatly improved farming practices for wet rice cultivation. There were innovations in wet rice agriculture with fertilization techniques for enriched soil, seed varieties for greater yields, and engineering designs for superior irrigation 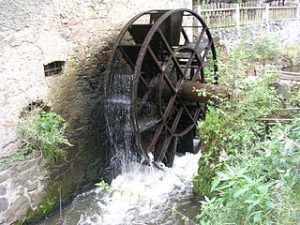 During the Southern Song Dynasty from 1127 to 1279, the imperial capital in the north was lost to foreign invasions and relocated to the south that accompanied large populations of refugees to migrate to the south. Initially, large numbers of migrants settled along the Yangtze River near the imperial capital. Following significant territorial gains by the Mongols, more migrants settled further southward around the Pearl River and reclaimed significant coastal lands for rice cultivation.