How and why did cast iron revolutionize China’s agriculture and farming methods?

Most people recognize the term cast iron from the common cooking tool known as the cast iron pan.  Cast Iron actually has a much deeper history, specifically in China’s agriculture.

China’s territory is outlined in green and of that territory, the green shading is a rough estimate of the amount of arable land. Less than half of the country has potential for farming.

China’s agriculture has played an important role in their culture and economy since its birth.  It played an integral role in expanding territory because even though people may not give it enough credit, food is what has to support a growing population.  China’s agricultural roots actually date back to the Paleolithic time period where people gathered wild plants with the same tools that they later used to farm millet and rice.  Excavations at Kuahuqiao, one of the earliest known Neolithic sites in eastern China, have documented rice cultivation ranging from 7,700 years ago.  That proves how instrumental farming has been to their culture as it seems it was something the people of China had been doing since the start of their civilization.  China has often been referred to as a developing country and its shortage of arable land has forced them to use more labor-intensive methods for farming. Although China has been known for this, they have implemented various methods that have been developed or imported that enable greater farming production and efficiency.

Three major revolutionary improvements in farming took place between 722 and 481 BC, the cast iron tools, the beasts of burden to pull plows, and the large-scale harnessing of rivers as well as developing water conservation projects.  Cast Iron was such an influential part of farming and changed the way Chinese farmers would use their tools forever.

Iron was in universal use for anything from cooking-pots to swords in an area that stretched from Liaoning to Yunnan and from Shantung to Sinkiang by 500 BC, depicted below.

During the Zhou era around 650 BC, iron foundries were private which allowed the owners to charge higher prices for iron.  After markup prices from the businesses that would cast the iron, farmers had to pay a high price for tools.  This limited the number of farms that were being efficient and created “knock-off” designs of high-end tools.  Small private foundries popped up all over the empire in the first decades of the Han and eventually, large state foundries had been established in most provinces commanderies.

The Zhou came into power by way of force, and after establishing their dominance, they brought China into a period of advanced technology that included using more iron to create better and stronger weapons. These years were at the beginning of what is now known as the Iron Age in China, which officially began in 600 CE.

The Han dynasty is often referred to as the golden age for Chinese people.  It saw an age of economic prosperity, which led to the nationalization of private iron industries in 117 BCE.  This government monopoly didn’t last long but during this time the Iron industry grew and almost every Han citizen had easier access to cast iron tools and their designs.

The cast iron of the Han had a lower Sulphur content and a higher carbon content than Warring States iron, which made it less brittle and easier to sharpen.

Cast Iron was primarily implemented in tools that would wear down after repeated strikes to the ground as well as tools made from wood that split upon heavy pressure.

Spades are more common for dry land farming.  This tool is similar to what we today call a shovel. It is thin and long and prior to cast iron, it would be carved out of wood.  Wood is an absorbent material that would soak if the soil was wet.  When the spade is wet it collects more wet dirt and slows the digging process.  Cast Iron improved the strength, durability, and life span of this tool.

Harrow tools were used to turn over fallow land, by breaking up impacted clods formed by ploughing wet soil, as well as weeding young millet plants.  The teeth were formed by cast iron machines and allowed for the tool to slide smoothly through the dirt.  Prior to cast iron, these teeth were made from thick wooden sticks tied tightly to the mainframe.

Ribbed rollers were cast iron tools that made farming much easier.  They were commonly attached to a cow or bull and were used to even out the soil after a crop yield in order to even out the land again for the next season.  The direction of the roller was controlled by a farmer walking behind the rollers, but the contraption was pulled by an animal as it was heavy. 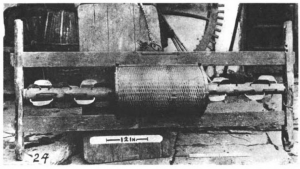 The roller below is a modern version of the roller, it has a wicker cover to protect the driver from splashes of mud.

A cast iron plough is a tool that is used in farming for initial cultivation of soil in preparation for sowing seed or planting to loosen or turn the soil.  The cast Iron plough was previously constructed from wood, but iron revolutionized the tool.  Wood tends to break or split under pressure which forced farmers to work at a slower pace to avoid these breaks.  The slower they were forced to work the fewer crops they would yield in one season.

Breakdown of the Plough:

The plough wasn’t completely made of cast iron, in fact, the part that was made of iron was called the Kuan.  In the Warring States, this piece was fixed directly on the end of a wooden Slade, but in the Han dynasty era it appears that it was usually fit to a heavy iron “tongue.”  The advantages of metal versus wooden tongue was that friction was reduced considerably with the metal. The interaction between the kuan and the metal tongue wasn’t the only place friction was reduced.  The soil would slide over the plough without sticking.  The extra weight of the iron share and mould-board would be amply compensated for by the reduction in friction. The weight difference is also something people have discussed and when such a heavy force meets with the cohesion of the earth, weight has little effect on friction.  Instead, the heavier plough actually made it easier to drive a straight and even furrow.

Benefits of the new Plough Design:

It was such a revolutionary piece that plough shares have continued to be made of cast iron to this day.  A cast iron tool is the perfect tool because after being used on a great deal through soil, its sharp point inevitably becomes dull and blunt, but it can be melted down and recast.  For the farmers who couldn’t afford to recast the iron, they would re-sharpen it by shaving it down.  The new curved design of the plough actually reduced the number of draught animals and exponentially decreased the amount of labor that was required by the farmers.  This new device combined with the crop rotation created more yields for each season and in turn fed more people.  The increase in crop yields was essential because China experienced river course changes that would completely ruin hundreds of river town farming fields that were essential to millions of people’s livelihood.

When iron tools first came into general use in the Warring States and Han, sickles were cast in iron in large numbers and were one of the cheapest tools to create.  They were gently curved with a thick ridge along the back for strength and a smooth blade; a thin tab of iron at the back of the blade served as a tang; the blade was usually 20-30 cm long.

There were different types of cast iron, such as white cast iron.  All pre-modern Chinese cast Iron has a very low silicon content and usually contains under .5% Si, therefore making it “white cast iron” which also contained carbon as cementite, Fe3C, making it extremely hard.  The strength was harder than that of quartz but the downside to this was its brittleness.  While its hardness may be considered advantageous, it becomes very abrasive-resistant, meaning if hit against a rock it could shatter.

Another version of cast iron is malleable cast iron, this means the object is first cast, then annealed at a high temperature, probably around 950 degrees Celsius, for a period of days. This specific treatment to the iron would cause the carbon in the iron to form into a sort of graphite, making it a much better mechanical property than regular cast iron.  This type of cast iron could be hammered into rocks and would withstand the beating.

Another form of cast iron is called the grey cast iron and it very similar to the white cast iron.  The iron is very low in carbon and silicon and would normally solidify as white cast iron, but when cooled very slowly over a period of days, it would produce the grey cast iron.  This process creates a strong form that makes it easier to mold other hot or melting metals to it.  This would be beneficial when molding together multiple parts of one machine or a large tool that consisted of many different pieces that needed to fit together perfectly in order to operate.

A new form of Iron replaced the common iron during the Chinese Iron Age called pig iron, which was easier to work with and malleable. It was easier to cast and set into shape by using huge fire pits to turn the pig iron into a melted form then after hammering it into form, they would let it set and cool using water to manipulate the process.

The development of a cast iron industry was essential for ancient China’s progress.  Cast iron most likely came from variations of bronze production techniques that were adjusted slightly from foundry worker to foundry worker because they worked side by side.  Realizing how cast-iron production came to be is important in understanding how China’s agriculture was catapulted to a whole new production level that increased efficiency and output to levels that had never been seen before.  Many people don’t understand the impact cast iron and different forms of iron production had on China’s agriculture and may not understand how significant the implementations were.  Every success has some downside and in the case of cast iron, it was the increase in agriculture output that allowed for a population expansion as well as deforestation due to the need for wood to heat and melt the iron. Overall, the invention of the cast iron was incredibly important to China’s history.

Li, Zhou. Reform and Development of Agriculture in China. SPRINGER, 2017.