Agriculture is one of the key aspects of Human civilization and Human history. The ability to control nature and plants was a key achievement of early humans and allowed the rest of civilization to flourish. Yet resources are needed to for farming and other agricultural activities like fishing and fermenting. Knowing how to use accessible resources like iron or fish populations is a key part of making food. We look to study how using the wide and varied resources involved in making food and drinks affected the interplay of people, their environment, and their economy as a unified system.

Cast iron was first introduced around 722 BCE.  The Iron age happened during 600 BCE.  Cast iron revolutionized tools that were primarily used on the dry land. China has often been referred to as a developing country and its shortage of arable land has forced them to use more labor-intensive methods for farming in the 20th century.  Although China has been known for this, they have implemented various methods that have been developed or imported that enable greater farming production and efficiency for centuries.  Three major revolutionary improvements in farming took place between 722 and 481 BC, the cast iron tools and the beasts of burden to pull plows, and the large-scale harnessing of rivers as well as developing water conservation projects. These improvements allowed for further excess agricultural products, which would be used for fermentation. The Iron Age in China began around 600 CE and with it came a period of advanced technology.  Cast Iron tools became incredibly important as they increased farming efficiency that yielded more crops each season to feed China’s growing population.

The rapid expansion of wet rice agriculture across southern China was a historic environmental development during the Middle Imperial Period that was facilitated by the Grand Canal, regional instability, technological advancement, and foreign invasion. The Middle Imperial Period began with the Sui Dynasty in 581 and ended with Song Dynasty in 1279. Wet rice cultivation required the warmer and wetter climate that is present in South China. The vast territory controlled by Imperial China was generally categorized into distinct geographic regions of north and south. The most prominent topographical feature of northern China is the Yellow River, while the most prominent topographical feature of southern China is the Yangtze River.

During the reign of the Sui Dynasty from 581 to 618, the major waterways of the Grand Canal were constructed between the Yellow River in the northern capital region and the Yangtze River in the southern rural region. The Grand Canal was the main transportation system that supported the proliferation of rice farming because it enabled crops grown in the south to be efficiently shipped to distant end markets in the north.

Fish were used to fertilize rice in wet rice cultivation throughout history. As this practice became more and more common, more and more aquaponics fertilization systems came to the forefront of historic Chinese agriculture. These practices kept waters nutritious and productive because the fish could be harvested for protein as well as fertilizing the water.

During the Tang Dynasty from 618 to 907, China initially flourished in the early Tang period with peace and stability, including a growing wine industry, until the outbreak of the An Lushan Rebellion in 755 began a long era of regional instability throughout northern China. Although the Tang Dynasty were ultimately able to quell the An Lushan Rebellion after nearly 14 years of gruesome warfare, Imperial China had sustained such devastating losses that the strength of the central authority in the north became dwarfed by the power of regional military governors. Until the Song unification in 960, Northern China would continue to face many periods of rebellion and warfare that caused a significant southward population shift.

During the Northern Song Dynasty from 960 to 1127, the reestablishment of strong centralized imperial rule in China created a historic era of economic expansion and technological advancement that greatly improved farming practices for wet rice cultivation. There were innovations in wet rice agriculture with fertilization techniques for enriched soil, seed varieties for greater yields, and engineering designs for superior irrigation.

During the Southern Song Dynasty from 1127 to 1279, the imperial capital in the north was lost to foreign invasions and relocated to the south that accompanied large populations of refugees to migrate to the south. Initially, large numbers of migrants settled along the Yangtze River near the imperial capital. Following significant territorial gains by the Mongols, more migrants settled further southward around the Pearl River and reclaimed significant coastal lands for rice cultivation. This movement of population and the importance of rice cultivation in the Southern Song created a split in the drinking habits of the North and South. The Southern Song increased production of Baijiu, an ethnically Han drink made from distilling rice.

The expansion of rice cultivation created a significant agroecosystem that remained a significant environmental feature throughout China until the present day. In 2012, 720 million tons of rice was produced globally with China being the world’s largest producer at share of 28%. This is equivalent to 333 of rice per capita. 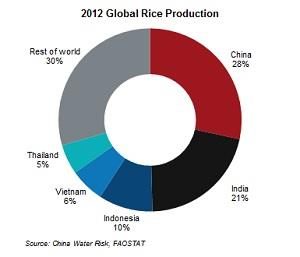